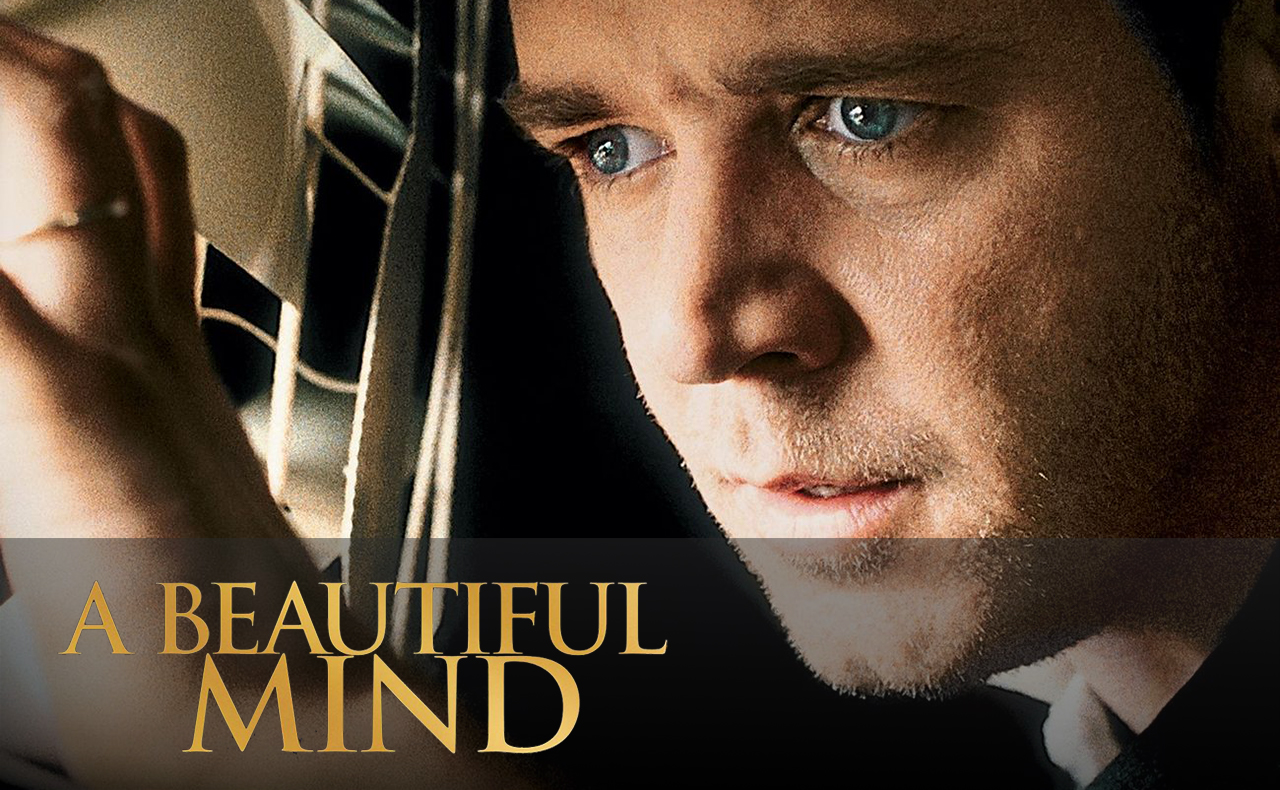 “John Forbes Nash Jr., the film’s subject, has been a figure of fascination in the world of ideas for more than 50 years. He won the Nobel Prize in 1994 for his revolutionary formula that changed the nature of economic trading. Before that, he went through decades of delusions and, perhaps, madness. Diagnosed as a paranoid schizophrenic, the West Virginia native was the subject of a biography by Sylvia Nasar, which became the “partial basis” for the film.”

A- Crowe: “He came to the location when we were filming in Princeton, unannounced. Every second I was with him, I used. Most of what he says is contradictory. He said things that we knew, from other research, weren’t true, so I studied mainly little things like body gesture. I don’t even pretend to get at the workings of his mind. That would be an oversimplification. I’m playing 35 years of pain and torment in his life.”

This movie is a wonderful example of the application of the principles of conscious control, applied, it is true, to solve quite an unusual problem. Unfortunately all schizophrenics cannot give such a solution to their illness. There are personality and nervous system disorders which render conscious work impossible. Like, for example, the schizophrenic who was chosen before Pr Nash to be the subject of this movie but had to be put aside because he was on all newspapers covers for having murdered his wife when thought treated.

I recommend this movie because it shows very clearly the different steps that Pr Nash had to follow in order to overcome the conscious manifestations of this illness, which are the same that anybody who has to overcome a habit would have to follow.

It is that practical and universal process which attracted my attention first. The main character of the movie, Pr Nash, found the way on his own to live together with his schizophrenia and paranoia. Seen from this angle, we can say that he has truly a beautiful mind.

In the first part of the movie, he is completely unaware of his illness. He lives in complete darkness. He does not know where he is. He thinks that what he lives is reality. He does not realize that the characters who dictate him his behaviour are produced by his ill mind and he refuses any help. He is prisoner of his own mind and the neurologist who treats him does not believe in any cure for that very reason.

Then comes the shock with reality. The awareness of the horror in which he lives. In the movie, this first shock comes from outside: his wife brings him back the confidential envelopes he had posted in a secret place. From this moment on, he does accept that he does not function like everybody, that he is ab-normal, but he remains incapable to control his thoughts which make him still lose contact with reality.

Later in the movie comes the second shock: a shock from inside this time. He begs his wife not to use her power to send him in a psychiatric asylum because he cannot stand the idea of spending there the rest of his life. She was going to sign when he succeeded to convince her that he would manage his illness when he told her that he could see that the little girl he was seeing for some years couldn’t be real as she was never growing or aging. This was the proof she was unreal.

From that moment on starts the long work on himself: the necessity of constantly inhibiting the desire to respond to the requests of the imaginary characters whose manifestations he cannot prevent, but that he knows now not to be real, but the product of his own imagination.

For the rest of his life he will learn not to listen to them and give them the place they deserve in relation to reality. Towards the end of the movie, there is a very characteristic scene where Pr Nash asks one his student if she also sees the journalist in front of him, before accepting to be interviewed by him.